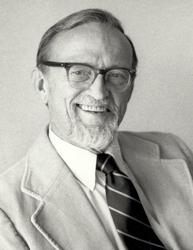 The Converse Miller Fellowship in American Political Behavior provides support for a graduate student in the University of Michigan Political Science Department to work with a faculty member in the Center for Political Studies.

Philip E. Converse, Robert Cooley Angell Distinguished University Professor of Sociology and Political Science in the College of Literature, Science, and the Arts, and research scientist in the Center for Political Studies at the Institute for Social Research, retired from the University of Michigan on May 11, 1989. He had resigned as director of the Institute for Social Research January 31, 1989, to prepare for his new role as director of the Center for Advanced Study in the Behavioral Sciences at Stanford University.

An internationally renowned scholar of public opinion and electoral behavior, Professor Converse was a widely quoted author whose publications occupy a prominent place in such areas as political ideology, the determinants of voting behavior, attitude measurement, time use, quality of life, mass-elite linkages, and survey methodology. Professor Converse was the author of three classic works: The Nature of Belief Systems in Mass Publics, The American Voter (co-author), and Elections and the Political Order (co-author), and is co-author of the book, Political Representation in France, which was co-winner of the Woodrow Wilson Foundation Award of the American Political Science Association in 1987.

Professor Converse’s stature in the social science community is evidenced by his having served in leadership positions in a number of professional organizations, foundations, and councils. He has been the recipient of Fulbright and Guggenheim Fellowships and a fellowship at the Center for Advanced Study in the Behavioral Sciences. Professor Converse is an elected member of the American Academy of Arts and Sciences (1968), the National Academy of Sciences (1973), the Finnish Academy of Science and Letters (1985), and the American Philosophical Society (1988). He received an honorary degree from his alma mater in 1974 and a Doctorate in Humane Letters from the University of Chicago in 1979. He was given the award four Exceptionally Distinguished Achievement of the American Association for Public Opinion Research in 1986. At the University of Michigan, Professor Converse received the Distinguished Faculty Achievement Award in 1973 and he was named the Henry Russel Lecturer in 1987.

Posted April 15, 2015: We announce with great sorrow that Philip E. Converse passed away on December 30, 2014. Philip E. Converse, an authority on public opinion and electoral behavior and past Director of the Center for Political Studies (CPS). Converse’s wide-ranging contributions to the field of political science changed how the world understood political behavior, according to Donald R. Kinder, Research Professor at CPS. “By brilliant example, in paper after paper, Converse demonstrated the value of a quantitative approach to understanding politics,” said Kinder. “His influence is profound. He is surely one of the most important social scientists of the 20th century.”

A Memorial Service for Phil Converse was held on Friday, April 10 from 3:00 pm to 4:30 pm in the Michigan Union Ballroom.